THE FINAL HUZZAH PART TWO: DONE: 50 THINGS BEFORE I'M 50 - CHALLENGE COMPLETED - So Long And Thanks For All The Fish 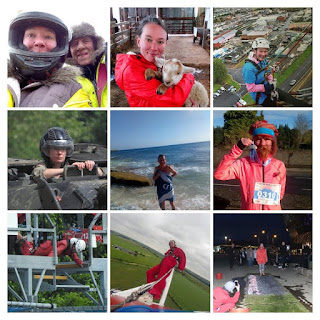 April 2017 I loudly and brazenly proclaimed to Facebook my intention of completing 50 tasks before I reached 50 years of age. The list had many different types of tasks, funny things, things I hadn't tried before and a fair few things which sounded ridiculous, for me - running, walking, cooking, abseiling, wingwalking!?

These last thirteen months have been my best of times, and my absolutely freaking worst of times.  A few short weeks ago I did what I set out to accomplish - complete 50 challenges before my 50th birthday, yes, I was a couple of weeks late but all things considered I'm having this as a win.

Loads of people start these sorts of lists, 50 before 50, 40 Before 40 - lots complete and lots don't. Funnily enough, the folk who don't complete are generally the people who have seemingly amazing lists, get themselves in to local newspapers, make a huge hoo hah of what they are going to do and then realise it's actually quite hard to keep motivated for this sort of thing. And quit. Personally, I was buggered if I was going to tell folk of my plans and then give up...

Not even when half way through this year of excitement my world fell apart.  Completely fell apart.  Losing two parents in seven weeks.....I'm still nowhere near getting over this, nor do I actually think I'll ever completely get over this, how can I?  It was a brutal seven weeks which has changed me significantly, for ever. :( :( :(

The photos in the collage above are of pictures from the top 9 blogs of activities I've done.  In the end, the wingwalk was my most read blog - I'm glad cos before then it was the skinny dip blog which was the most read and that surprised me in many many ways!   But in the end, the top activities were wingwalking, skinny dipping, driving a tank, abseiling off the Newport Transporter, sheepwrangling, quadbiking, Velocity - the fastest zipwire in the world, running- C25k and all other 5ks and the firewalk.

I did a lot of activities where there were medals and certificates on offer, I'll do a LOT for a shiny shiny medal or a stificate.  This is my 'swag' photo: 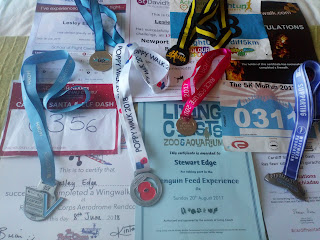 The list I have in my head of what were my favourites differs a little bit from what were the most popular posts.   My top five things - for different reasons are as follows:

The most challenging and the biggest buzz: 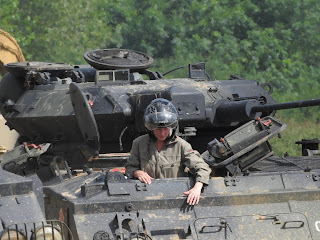 Driving a tank surprised me.  It was a late addition to the list and I'm so freaking happy I did it.  Not being able to drive - a thing - meant that to be in charge of a 17 tonnes vehicle was a major achievement.  It was something that 13 months ago I probably wouldn't have considered doing, but here I am now, still almost buzzing at the thought I actually did this.  Looking back, it's a helluva an achievement to know I've done this, completely quirky, totally off the wall, and, I still can't quite believe how good I looked in tank overalls and a helmet!

The Funniest and Most Quirky Unique Challenge:

Think this is a challenge lots of people didn't see, or didn't get. But as far as I'm concerned this is one of my favourite things from throughout the whole year.  To say the longest place name in Wales in three different ways.  There is NOBODY else who will have tried this, this is me, its my own truly unique item and it still cracks me up:

The Truly Most Terrifying and Most Out My Comfort Zone:

Abseil Off the Newport Transporter Bridge 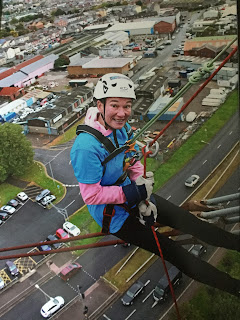 Without question, abseiling off the top of the Newport Transporter Bridge, for charity, gave me my biggest, kneetrembling, I'm about to pee my pants moment.  No contest.  The scariest moment of this year, and my life, came when I had to duck underneath the ledge at the top of the bridge, grasp onto the rail for dear life and then 'let go'.  I was shitting myself - excuse the language but there is no other way to describe that moment when you are asked to step backwards off a VERY high bridge and 'let go'.  My legs were literally trembling, they really were, and it was the moment in the last 13 months when I actually did think, 'I'm not sure I can actually do this'.  To know that I did then do it, probably my stand out proudest moment.  And I raised quite a lot of money for a south Wales hospice so a few different reasons to look back on this fondly.

The Most Satisfying and Biggest Commitment: 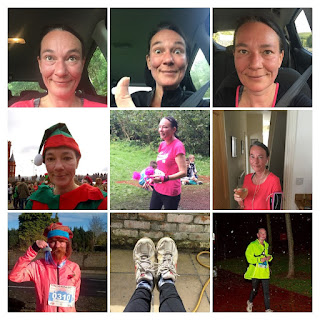 Couch to 5k, and the subsequent fun run 5ks  I've done,  without doubt demanded the most commitment, the biggest commitment I could give to any 'task'. I was 49 years old, never an athlete or sporty person, I've never been in a gym in my life and yes, I hold my hands up - I smoke, and not only do I smoke but I smoke - a lot!  And have done since I was 19 years old.  But, it was on my list as something I thought might be doable, but a challenge all the same. And yep, it was a huge godalmighty challenge but the one which probably puts the biggest smile on my face and the one which I'm determined to carry on with. When I started C25k with Stewart, I cried, I cried for most of the first runs, I'm not kidding.  It was a huge wake up call for what I'd done to my body. But, we kept going, I kept going, and bloody hell I did it.  Run for 30 minutes continuously and complete 5k.  It's kind of gone wrong since I lost my parents but it's the thing I most want to carry on with and I have already signed up for some more runs for this year.  It was also the thing my Dad was most proud of before he died and that, is a huge factor in why I want to carry on.

The Funnest Challenges and the Cutest Pictures;

Milk a Cow, Be a Penguin Zookeeper and Sheepwrangling

These were not exactly challenging, they were fun, they were cute and by God I'm so glad I got to play on farms and get up close and among different animals.  50 Before 50 is a subjective challenge type of thing - I completely get that the most difficult thing with my list was trying to schedule and fit everything in.  I totally get that a lot of the things were not exactly testing - but without the list, to be honest, I probably wouldn't have tried half this stuff.

The proper 'challenges' I've faced this last 13 months have involved the serious life stuff - so I'm not going to regret that I didn't have marathons or skydives or flying lessons.  I'm quite happy with what I have done and I'm quite happy that I'm about to end with pictures of cute animals. 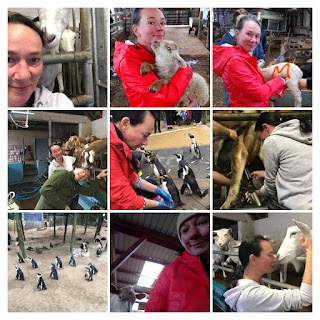 So, this is my final blog.  And that actually makes me REALLY sad.  I have had a blast this last year, not just doing this stuff, but also writing up about it.  I've honestly felt that each time I've written a blog that I was writing for friends.  And even though there haven't been any comments, I still knew that you've been there reading, watching and supporting - particularly through the hard times, the seriously tough times.  So, thank you, thank you, thank you - not sure what I would have done these last few months without you - so DIOLCH, GRAZIE, MERCIE, SHUKRAN, HVALA, TAK , DANKE, EFHARISTO, TODAH, XIEXIE, OBRIGADO, SPASIBO, ARIGATO

THE FINAL HUZZAH PART TWO: DONE: 50 THINGS BEFORE I'M 50 - CHALLENGE COMPLETED - So Long And Thanks For All The Fish

50 BEFORE 50 - DONE!   Ticked off, completed, done and dusted. April 2017 I loudly and brazenly proclaimed to Facebook my intention of c...